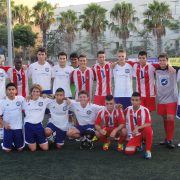 A total of 25 players of LA Premier FC have enjoyed five days an unforgettable experience in Barcelona, organized by TakeBall and AMSportsTour. The American expedition played some soccer friendly matches against the best Catalans Football teams. They trained with several Catalan coaches. The LA Premier FC also attended the anxiously awaited fist leg between FC Barcelona and Real Madrid… An incomparable and unforgettable Tour.

The 25 American teams composed in U-13 and U-17, stayed in Barcelona from the last 22 th of August to the 27th of August. The LA Premier FC competed with class Catalan football teams like CE Manresa, CE Júpiter and CF Barceloneta. And they exchange highly styles very helpful to both schools of football. Los Angeles Premier FC is one the most popular schools of football in EEUU. The general aim of the football school is focusing on the education and training players through sport. Furthermore, they supply the most important professional soccer teams of United Estates.

Los Angeles Premier FC enjoyed with the top-quality sporting facilities chosen to carry out football trainings and technical skills by Spanish coaches. But the high moment of the Tour was to attend one of the best soccer matches of the day. TakeBall shared with the American team a very special football night: The away game in the Supercopa qualifying rounds between the FC Barcelona and Real Madrid at Camp Nou.

The TakeBall and AMSportsTours magic week also included the best sightseeing to know Barcelona and the best places where you can savour the local cuisine. Another must-see was the Camp Nou and its Museum, the most visited in Catalonia. The family members of players could visit the most cultural and monumental Barcelona with a range of guided walks and a boat ride on the Barcelona Port. In essence, a wonderful sport and leisure time experience that finished last 27 of August. TakeBall and AMSportsTours together with many anecdotes of players reinforce the authenticity of the Tour. An unforgettable Tour that we will repeat again with more surprises.