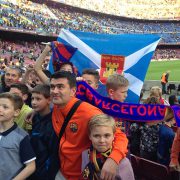 Players of Ferry Athletic Scotland became the starts of a week of “passion” for football. Barcelona and Manresa were the perfect destination for both junior teams of the Scottish club. Some previous days before celebration of Catalan Easter, they had a great time loaded of emotion, intensity ….and football days. All this, thanks to the work, effort and planning of TakeBall and AMsportstours.

The Ferry Athletic Scotland enjoyed the delights of Barcelona and competed with the best clubs of the Catalan capital. From April, the 5th to the 9th, the junior Scottish club played two friendly matches against Espanyol and Manresa. The sports city, “Dani Jarque”, symbol of the Spanish football quarry in honour of the former “blanquiazul” player, and where the first team trains, became the ideal stage for the event. Players of Ferry Athletic Scotland could also show off their skills and progression in two workouts, one technical and one tactics, with the advice of top level coaches. A visit to the Nou Camp was again one of the highlights of the visit of the Scottish teams. The youth players enjoyed FC Barcelona- Betis of the Spanish First Division League. Messi, Neymar, etc…!, the best players of the world in direct.

It was a really international football show, which ended with the triumph of FC Barcelona 3-1. It was an authentic party, an unforgettable and long visit where Catalan gastronomy, monuments and beaches of Barcelona didn’t lack. A unique, special sports and tourism experience … handed by AMsportstours and TakeBall.